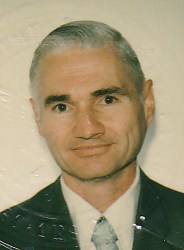 Mr. Thomas Charles Kaut, 89, of Spindale, transitioned Thursday, July 19, 2018 at Hospice of the Carolina Foothills, Forest City.
Tom was born on a Pullman train in a Pittsburgh, Massachusetts train station on August 19, 1928 to Emily Isabelle Damery Kaut and Henry Luther Kaut. In addition to his parents, he was preceded in death by his older brother Harry Kaut of New Jersey. Tom transitioned to the arms of his beloved Heavenly Father one month before his 90th Birthday. Tom had been fascinated with airplanes since early childhood and after finishing high school joined the School of Aeronautics in New York for two years training as pilot and airplane mechanic. He joined the New Jersey Air National Guard and served his country 6 years during the Korean War as an airplane mechanic. After pursuing several careers, he became an ordained minister with The Assemblies of God International and authored several spiritual books which can be purchased at Amazon.com.
Tom is survived by his wife Bernice Ramsey Haulk Kaut; his  stepsons, Donnie Haulk and wife Lisa, of Charlotte, Christopher Haulk of Lake James, Anthony Haulk of Forest City, Jeremy Haulk of Rutherfordton and wife Kathy of Forest City; there are 11 grandchildren and 9 great grandchildren.
A Memorial Service will be conducted at 3:00 pm Sunday, July 22, 2018 at Washburn & Dorsey Funeral Home. The Rev. Donnie Haulk and Captain O.A. Fish will officiate.
The Visitation will be from 2 pm until 3 pm Sunday at the funeral home prior to the service.
In lieu of flowers, memorials may be made to South Mountain Christian Camp, PO Box 9, Bostic, NC 28018 or Hospice of the Carolina Foothills, PO Box 336, Forest City, NC 28043.
Online condolences @www.washburndorsey.com.
To order memorial trees or send flowers to the family in memory of Thomas Charles Kaut, 89, please visit our flower store.
Send a Sympathy Card