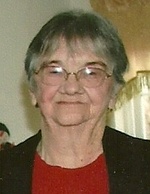 Mrs. Susie Robinson Smart, 84, of Ellenboro, died Tuesday, November 8, 2011.
She was the widow of Erastus V. Smart, and daughter of the late Frank and Eddie A. Robinson.
She is survived by two daughters, Connie Terry of Ellenboro and Barbara Smith of Gastonia; four sisters, Bernice Goode of Maiden, Judy Jones of Ellenboro, Betty Lattimore and Reba Lattimore, both of Rutherfordton; three brothers, Roger Robinson of Bostic, Jack Robinson Sr.  and Paul Robinson, both of Ellenboro; there are two grandchildren and two great grandchildren.
The Funeral will be held at 11:00 AM Thursday, November 10, 2011 at Corinth Baptist Church. Rev. David Jendrey and Rev. Ad Hopper to officiate. Burial will follow in the church cemetery.
The Visitation will be from 6 PM until 8 PM Wednesday at Washburn & Dorsey Funeral Home.
Online condolences @www.washburndorsey.com.
To order memorial trees or send flowers to the family in memory of Susie Robinson Smart, please visit our flower store.