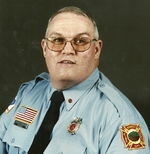 Mr. Stephen Dale Franklin, 60, of Holland Street, Forest City, died Tuesday, July 26, 2011.
A native of Waynesville, he was a member of Golden Valley Missionary Methodist Church. He was a member of the Sandy Mush Volunteer Fire Department, and a former member of Forest City Fire Department and had been a volunteer firefighter for 38 years. He had worked at Schafer's Amoco.
He is survived by his wife, Linda Gail Franklin; his mother, Mattie Quirk of Waynesvile; his daughter, Connie Goode of Bostic; two brothers, Kenny Franklin and Bobby Quirk, both of Waynesville; three grandchildren and one great grandchild.
The Funeral will be held at 3:00 PM Sunday, July 31, 2011 at Golden Valley Missionary Methodist Church. Rev. Lamar Hewitt and Rev. Bryan Melton will officiate. The Rutherford County Firefighter's Honor Guard will serve during visitation and the service hour. Burial will follow in the church cemetery.
The Visitation will be from 1:00 PM until 2:45 PM Sunday at the church prior to the service.
Memorials may be made to the Golden Valley Missionary Methodist Youth Fund, PO Box 531, Bostic, NC 28018.
Washburn & Dorsey Funeral Home is in charge of services.

To order memorial trees or send flowers to the family in memory of Stephen Dale Franklin, please visit our flower store.
Send a Sympathy Card