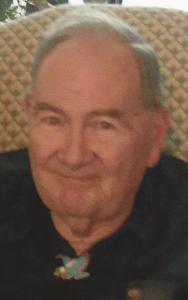 Mr. Samuel Aiden Harrison, 81, of Sunshine, died Monday, December 2, 2013 at Willow Ridge Nursing Center.
He was the widower of Ginger Melton Harrison, and son of the late Edley and Novella Toney Harrison, he was also preceded in death by a sister, Blanche Lookadoo. He was retired from Cowan Tire & Battery, a member of Cedar Grove United Methodist Church, and was a Army veteran of the Korean war.
He is survived by his daughter, Kay Harrison Flack of Rutherfordton; his son Kevin Harrison and his wife Debra, of Sunshine; there are four grandchildren, Leslie Blankenship, Lindsey Harrison, Michael Flack, and Cole Flack; there are two great grandchildren, Ava Elizabeth Blankenship and Ginger Grace Blankenship.
The Funeral will be conducted at 3:00 pm Wednesday, December 4, 2013 at Cedar Grove United Methodist Church. Rev. David Hawkins will officiate. Burial will follow in the church cemetery with Military Rites provided by the Rutherford County Honor Guard.  Pallbearers are Roy Harrison, Kevin Blankenship, Cameron Hodge, Aiden Cole Flack, Ricky Medford, and Phillip Walker.
The Visitation will be from 1:30 pm until 2:45 pm Wednesday in the church sanctuary prior to the service.
Memorials may be made to Cedar Grove UMC, 160 Toney Road, Bostic, NC 28018 or the Matthew Pannell Shining Star Foundation, 208 Radford Road, Ellenboro, NC 28040.
Washburn & Dorsey Funeral and Cremation Service is in charge of arrangements.
Online condolences @www.washburndorsey.com.
To order memorial trees or send flowers to the family in memory of Samuel Aiden Harrison, please visit our flower store.