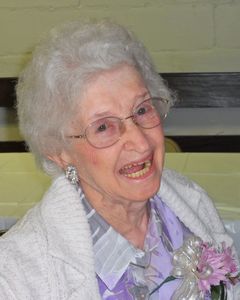 Mrs. Ruby Kilby Melton, 98, of Bostic, passed away peacefully Thursday morning, July 31, 2014 at Henderson Care Center in Forest City.
Ruby was born February 29, 1916 in North Wilkesboro to Grace Jones Kilby and Thomas Gaither Kilby, the third of seven children. She graduated from North Wilkesboro High School in 1934 and worked thereafter in retail, including J.C. Penney, for a number of years. While there, she met her future husband, Frank Melton, through an arrangement with a mutual friend. She and Frank spent their married life on his family farm in Golden Valley After Frank's death in 2000, Ruby continued living on the farm for a short time before making her home with Joyce and Floyd Jones in Bostic, who lovingly cared for her until the last few months of her life, when she moved to Henderson Care Center. Though her time there was short, she enjoyed many new friendships.
In addition to her her husband Frank, and her parents, she was preceded in death by her siblings Conrad Kilby, Gwyn Kilby, Sr., Tommy Kilby, Mabel "Bit" Atkins, Fannie Ruth "Specs" Foster, and nephews Tommy Melton and Steve Newton.
She is survived by her sister, Thelma Redman of Eden, NC; nieces Martha Simpson of Winston-Salem, NC, Penny Rose of Ahoskie,NC, Chris Wilson of Clover, SC; and nephews Michael Redman of Eden, Gwyn Kilby, Jr., of North Wilkesboro, Keith Kilby and Steve Kilby, both of Asheboro, NC, Don Melton of Bostic, and Mike Melton of Terrell, NC. Survivors also include sisters-in-law Dorothy Newton of Bostic and Ruth Brownlow Kilby of Asheboro, and very special friends Joyce and Floyd Jones, and their children of Bostic.
Ruby lived a long and happy  life, adapting and embracing farm life eagerly after early life in the city. She treasured her countless friends and was very active in the in the community as well as Golden Valley United Methodist Church until her last days.
Celebrations of Ruby's life will include Visitation from 5pm until 7 pm Saturday, August 2, 2014  at Washburn & Dorsey Funeral and Cremation Service in Bostic, and the Funeral Service will be conducted at 2:00 pm Sunday, August 3, 2014 at Golden Valley United Methodist Church, led by Rev. Linda Stack-Morgan, Pastor of Golden Valley United Methodist Church. Burial will follow in the church cemetery. Pallbearers are Johnny McCurry, Mike Melton, Don Melton, Ron Hudson, Charlie Simpson, and Matthew McCurry.
The family wishes to honor and extend deep gratitude to Joyce and Floyd Jones and their family, Ruby's adopted family, for many years of love and devotion to Ruby.
Flowers are appreciated, however memorials to her beloved church are preferred, directed to Golden Valley United Methodist Church, PO Box 460, Bostic, NC 28018.
Online condolences @www.washburndorsey.com.
To order memorial trees or send flowers to the family in memory of Ruby Melton, please visit our flower store.
Send a Sympathy Card