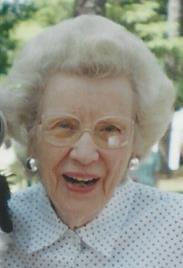 Mrs. Marjorie Williams Fort, 96, of Bostic, died Sunday, October 6, 2013.
A longtime resident of Thomasville, GA, she was the daughter of the late Dr. and Mrs. William Brown Williams. She was also preceded in death by two infant brothers, and her two sisters, Eloise Schenck and Jean Wilson. She will be greatly missed but our comfort is in knowing she is with our Lord and Savior Jesus Christ.
She is survived by her daughter, Marjorie Fisher Bleecker of Bostic; a son, Richard David Fisher of St. Petersburg, FL; there are five grandchildren, seven great grandchildren, and numerous nieces and nephews.
The Funeral was conducted at 12:00 pm Wednesday, October 9, 2013 in the Chapel of First Baptist Church of Thomasville, Georgia. Burial followed in the Laurel Hills Cemetery in Thomasville. Allen & Allen Funeral Home was in charge of arrangements in Thomasville and Washburn & Dorsey Funeral and Cremation Service was in charge of local arrangements.
In lieu of flowers, memorials may be made to Hospice of Rutherford County, PO Box 336, Forest City, NC 28043, or First Baptist Church of Thomasville, 210 North Broad Street, Thomasville, GA 37192, or The Gideons International, PO Box 2361, Thomasville, GA 31799.
Online condolences @www.washburndorsey.com.
To order memorial trees or send flowers to the family in memory of Marjorie Fort, please visit our flower store.
Send a Sympathy Card