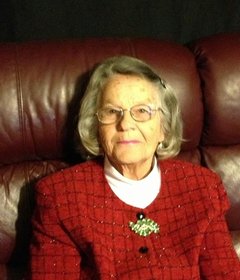 Mrs. Joann Putnam Bridges, 78, of Ellenboro, died Saturday, January 10, 2015 at her residence.
She was the daughter of the late  Malcolm Putnam and Laura McSwain Putnam, she was also preceded in death by four brothers, William Putnam, Sam Putnam, John Putnam, and Jimmie Putnam; four sisters, Inez Conner, Lena Baker, Jessie Wall, and Patsy Johannessen. She was a member of Walls Baptist Church, and a Worthy Matron of the Eastern Star.
She is survived by her husband of 60 years, Morris J. Bridges; two daughters, Pamela D.Harris of Matthews, and Kim Shires of Ellenboro; a son, Kenneth Dale Bridges of Ellenboro; three sisters, Della Walker and Dianne Padgett of Lattimore, and Jean Farabee of Greensboro; there are 5 grandchildren, Jason Shires, Brandon Shires, Erin Bridges, Megan Bridges, and Austin Bridges.
The Funeral will be conducted at 11:00 am Tuesday, January 13, 2015 at Walls Baptist Church. Rev. David Philbeck will officiate. Burial will follow in the church cemetery. Pallbearers are Eric Bridges, Heath Bridges, Larry Baker, Matt Padgett, Daryl Bozovitch, and Frank Wall, Jr.
The Visitation will be from 9:45 am until 10:45 am Tuesday in the church sanctuary prior to the service.
In lieu of flowers, memorials may be made to Hospice of Rutherford County, PO Box 336, Forest City, NC 28043.
Washburn & Dorsey Funeral and Cremation Service is in charge of arrangements.
Online condolences @www.washburndorsey.com.


To order memorial trees or send flowers to the family in memory of Joann Bridges, please visit our flower store.
Send a Sympathy Card