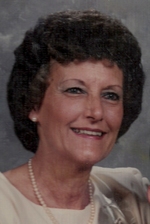 Mrs. Jean Turner Callahan, 70, of Freeman Road, Forest City, died Saturday, March 31, 2012 at Hospice House, Forest City.
She was the widow of Rupert Lee Callahan, and daughter of the late Sam and Bertha Turner. She was also preceded in death by a granddaughter, Heather McGinnis. Jean was a member of Wilson Baptist Church.
She is survived by her son, Wayne Pruett and his wife Julia, of Ellenboro; a daughter, Barbara King and her husband Dennis, of Forest City; a sister, Betty Jo Greathouse of Forest City; two brothers, Marshall Turner of Bostic, and Bill Turner of Mooresboro; two grandchildren, Casey Pruett and Shea McMahan; two great grandchildren, Dylan McMahan and Alex McMahan.
The Funeral will be held at 11:00 AM Tuesday, April 3, 2012 at Washburn & Dorsey Funeral Home. Rev. John Edwards will officiate. Burial will follow in the Wilson Baptist Church Cemetery.
The Visitation will be held from 10 AM until 11 AM Tuesday at the funeral home prior to the service, and at other times the family will be at the residence of Wayne Pruett, 597 Terry Road, Ellenboro.
Online condolences @washburndorsey.com.
To order memorial trees or send flowers to the family in memory of Jean Turner Callahan, please visit our flower store.
Send a Sympathy Card