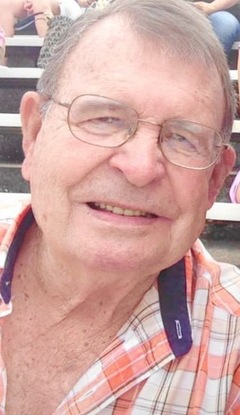 Mr. Henry Poe Glover, 77, of Ellenboro, died Tuesday, July 12, 2016 at his residence.
He was the widower of Shirley Walker Glover, and son of the late James and Lena Glover, and was also preceded in death by a brother, Larry Glover.  Henry retired from the maintenance department at Isothermal Community College. He was a member of the former Hopewell United Methodist Church; the Forest City Masonic Lodge, and was an Eagle Scout.
He is survived by his daughter, Wendy Glover Keeter of Kings Mountain; two sons, Richard Glover and George Glover, both of Ellenboro; his brother, George Douglas Glover of Salisbury; his sister, Nina Jo Rogers of Pensacola, Fl; there are three grandchildren, Maddison Keeter, Landon Keeter, Graham Keeter; and 2 step grandchildren, Justin Humphries and Jennifer Campbell.
A Graveside Service will be conducted at 1:00 pm Saturday, July 16, 2016 at the Hopewell Community Cemetery. The Rev. Paul Scott will officiate. The Forest City Masonic Lodge will  conduct a Masonic service.
The Visitation will be from 11:00 am until 12:00 pm Saturday at Washburn & Dorsey Funeral and Cremation Service.
Memorials may be made to Hospice of Rutherford County, PO Box 336, Forest City, NC 28043.
Online condolences @www.washburndorsey.com.
To order memorial trees or send flowers to the family in memory of Henry Poe Glover, 77, please visit our flower store.