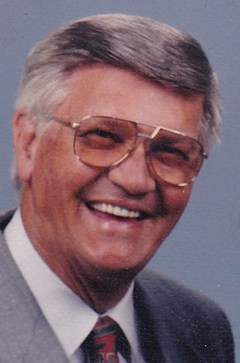 Mr. Henry Edward "Ted" Jones, 88, of Forest City, passed away Thursday, January 24, 2018 at Fair Haven Home of Forest City.
He was born in Ellenboro and was the son of the late Pinckney Ralph Jones and Kate Keever Jones. In addition to his parents, he was preceded in death by his wife Lennie  Lee Atchley Jones; his children, Henry Edward Jones, Jr., Sherry Jones Bradley, and Judy Lynn Jones; his sisters, Katie Lou Wells and Annie Belle  Robbins; and 8 brothers, Arthur Lee, Pinkney , Clifford,  Jerry , Charles, Ray Keever, David and John.
Ted was a lifelong member of Walls Baptist Church where he served in several positions. He was well known as a top automobile salesman at Beam Chevrolet, and also worked with Bill Turner and W. B. Wilson. He began his adult life working for Stonecutter, and served in Germany in the US Army from 1951 to 1953, and in the reserves until November 1956.
He is survived by 5 grandchildren, Crissy White Wilson, Donald Howard Bradley, Chad Howard Bradley, Tara Jones Palmer and Edward Lee Jones, all of Rutherford County; there are 6 great grandchildren, Hadden Wilson, Chase Wilson, Alexandria Smalley, Gavin Palmer, Owen Woodard and Aliyah Bradley;  his 2 sisters, Emma Sue Ayers of Ellenboro, and Joann Blankenship of Henrietta; and 2 brothers,  Robert "Bob" Jones and wife Wilma,  of Ellenboro, and Rev. Perry Jones and wife Joyce, of Forest City; a brother-in-law, Floyd Wells; and 3 sisters-in-law, Linda Jones, Johnnie Sue Conner, and Geneva Wilson.
The Funeral will be conducted at 3:00 pm Sunday, January 28, 2018 at Walls Baptist Church. The Rev. David Philbeck and Rev. Perry Jones will officiate. The committal service will be held in the sanctuary. Burial will be in the church cemetery. Pallbearers are Chad Bradley, Donald Bradley, Hadden Wilson, Chase Wilson, Aaron Vickers, and Lee Jones.
The Visitation will be from 1:30 pm until 2:45 pm Sunday in the church prior to the service.
Memorials may be made to Hospice of Rutherford County, PO Box 336, Forest City, NC 28043.
Washburn & Dorsey Funeral and Cremation Service is in charge of arrangements.
Online condolences @www.washburndorsey.com.

To order memorial trees or send flowers to the family in memory of Henry Edward "Ted" Jones, 88, please visit our flower store.