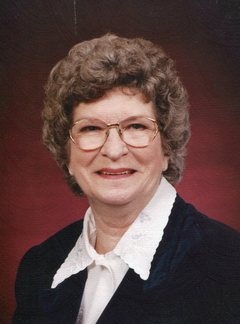 Mrs. Hazel "Polly" Pearson, 84, of Sunshine, died Thursday, November 6, 2014 at Hospice House, Forest City.
She was preceded in death by her husband of 64 years, James Vernon Pearson who died in 2011.  She was the daughter of the late Robert and Ellie Louise Jones McGinnis, and was also preceded in death by two infant sons, Jack Arnold Pearson and Marcus Vernon Pearson. She was retired from Bon Worth and was a member of Mt. Harmony Baptist Church.
She is survived by her daughter, Carol Ramsey of Sunshine; two sons, Torrence Pearson and Jeff Pearson, both of Sunshine; a sister, Helen Haynes of Bostic; there are 6 grandchildren, 2 step grandchildren, 12 great grandchildren, and 4 step great grandchildren.
The Funeral will be conducted at 3:00 pm Saturday, November 8, 2014 at Mt. Harmony Baptist Church. The Rev. Eugene Passmore will officiate. Burial will follow in the church cemetery.  Pallbearers are Stoney Pearson, Michael Pearson, Jeff Pearson, Jr., Jacob Pearson, Caleb Bennett, and Ricky Lee.
The Visitation will be from 1:30 pm until 2:45 pm Saturday at the church prior to the service.
Washburn & Dorsey Funeral and Cremation Service is in charge of arrangements.
Online condolences @www.washburndorsey.com.
To order memorial trees or send flowers to the family in memory of Hazel "Polly" Pearson, please visit our flower store.