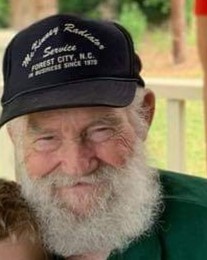 Harold Dean Roberts, Sr., died Monday, September 6, 2021  at Deer Park in Nebo.
He was the widower of Mary "Ruth" Roberts and a son of the late Nelson and Mary Pauline Roberts. He was also preceded in death by a son, Harold "Dean" Roberts,Jr.; 2 sisters, Mary Newson and Sue Roberts; and a brother, Ken Roberts. He was raised in Cottage Grove, OH. Harold was a long distance truck driver for most of his adult life, but had many different jobs. He was a loving husband, father, and grandfather.
He is survived by his daughter, Marcie Burch and her husband Brian, of Union Mills; his son, Robie Roberts of Rutherfordton; 2 sisters, Lela Brackett of Forest City, and Sandra Murvine and her husband David of New Franklin, OH; his grandsons, Dillon Burch, Nathan Burch, Jesse Burch, and Bryar Burch, all of Union Mills, Nicholas Roberts and Dyllan Toney of Rutherfordton; his granddaughters, Brittany Roberts, Rachel Roberts, and Aubree Roberts, all of Rutherfordton, Amber Stephens of Forest City, Bri Henderson of Bradenton, FL, Emily Whiteside of Spindale, and Jessica Green of Ellenboro; there are 15 great grandchildren and another due in March 2022.
A Graveside Service will be conducted at 2:00 pm Friday, September 10, 2021 at Mt. Lebanon Baptist Church Cemetery. The Rev. Paul White, Jr. will officiate. Pallbearers are David Allen, Jesse Burch, Nathan Burch, Brian Burch, Rodney McCurry, and Don Ford.
Memorials may be made to Mt. Lebanon Baptist Church, 801 Mt. Lebanon Church Road, Bostic, NC 28018.
Washburn & Dorsey Funeral and Cremation Service is in charge of arrangements.
Online condolences @washburndorsey.com.
To order memorial trees or send flowers to the family in memory of Harold Dean Roberts, Sr., 81, please visit our flower store.
Send a Sympathy Card