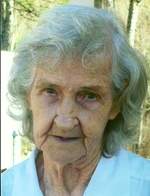 Mrs. Geneva Ann Johnson Smith, 94, of Golden Valley, died Tuesday, February 21, 2012 at Rutherford Regional Medical Center.
She was the daughter of the late R.R. and Ida Johnson, and was also preceded in death by two sons, Edward Gene Smith and Mack Smith. She was a member of Fairview Baptist Church.
She is survived by one daughter, Doris Elliott of Mill Spring; five sons, Dewey Smith, Harold Smith, J.B. Smith, Morris Smith, and Clay Smith, all of Golden Valley; two stepdaughters, Corrine Smith and Ruth Roper, both of Forest City, and a stepson, Clyde Smith of Forest City; there are 15 grandchildren and 12 great grandchildren.
The Funeral will be held at 2:00 PM Thursday, February 23, 2012 at Fairview Baptist Church. Rev. Gary Smith and Rev. Ned Owens will officiate. Burial will follow in the church cemetery.
The Visitation will be held in the church fellowship hall following the conclusion of the graveside service.
Memorials may be made to Fairview Baptist Church, % of Robin Smith, 433 South Creek Road, Bostic, NC 28018.
Washburn & Dorsey Funeral Home is in charge of arrangements.
Online condolences @www.washburndorsey.com.
To order memorial trees or send flowers to the family in memory of Geneva Ann Smith, please visit our flower store.