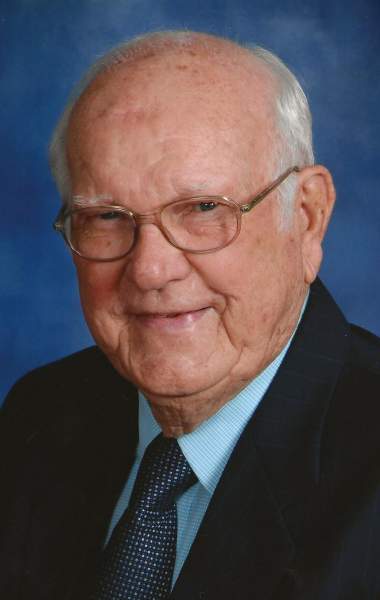 Mr. Foy Flack Melton, 100, was born July 6, 1919 in Golden Valley and went to be with his Lord and Savior on Monday, February 10, 2020. He was the son of Douglas and Myrtle Melton.
He was preceded in death by his parents; first wife, Ruth Goode Melton; second wife, Annie Belle Melton; stepson George Powell; brother, Preston Long Melton; and 3 sisters, Eloise Stilwell, Loretta Lemmond, and Helen Sue Melton.
Foy graduated from Pfeiffer College before joining the US Army and served during WWII. After service, he formed his own company, Melton Construction and later Economy Builders in Chester, SC where he lived and operated the company until his retirement.
He attended Bethel United Methodist Church in Chester, but remained a faithful member of Golden Valley United Methodist Church and never missed a Memorial/Homecoming Service until 2019 when his health didn't allow him to return.
He is survived by 2 sisters, Margaret Cline Wert and Hannah Maurer, both of Charlotte; brother-in law Fred Morrison of Waynesville, NC; 3 stepgrandchildren; and loving nieces and nephews that saw to his care in his later years. He will be remembered for his sweet smile and kindness.
The Funeral will be conducted at 2:00 pm Saturday, February 15, 2020 at the Golden Valley United Methodist Church. The Rev. Dr. Pat Looper and the Rev. Linda Stack Morgan will officiate. Burial will follow in the church cemetery with Military Rites rendered by the Rutherford County Honor Guard. Pallbearers are Mike Lemmond, Justin Lemmond, Brian Baker, Foy Stilwell, Phil Baker, and Don Melton.
The Visitation will be from 12:45 pm until 1:45 pm Saturday at the church prior to the service.
Memorials may be made to Golden Valley Church, PO Box 460, Bostic, NC 28018.
Washburn & Dorsey Funeral and Cremation Service is in charge

To order memorial trees or send flowers to the family in memory of Foy F. Melton, 100, please visit our flower store.