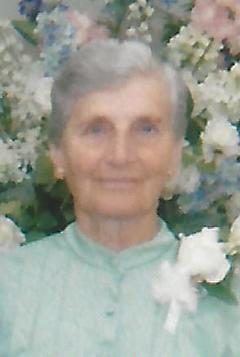 Mrs. Ettie B. Hutchins, 89, of Union Mills, died Thursday, June 26, 2014.
She was the widow of Edward Hutchins, and daughter of the late Alfred and Mary Black. She was a member of Florence Baptist Church.
She is survived by two sons, Von Hutchins and his wife Teresa, of Rutherfordton and Tommy Hutchins of Union Mills. There are 3 grandchildren, Joni Moss and her husband Kevin, Brad Hutchins and his wife Suzanne, and Andy Hutchins; there are 4 great grandchildren, Karlie Moss, Meghan Moss, Ty Hutchins, and Hank Hutchins.

A Graveside Service will be conducted at 11:00 am Monday, June 30, 2014 at Pisgah United Methodist Church Cemetery. Rev. Danny Camp will officiate.
Memorials may be made to Hospice of Rutherford County, PO Box 336, Forest City, NC 28043.
Washburn & Dorsey Funeral and Cremation Service is in charge of arrangements.

To order memorial trees or send flowers to the family in memory of Ettie B. Hutchins, please visit our flower store.
Send a Sympathy Card