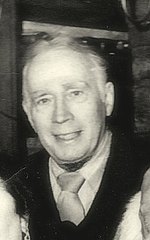 Mr. Daniel Bernard Meade, 89, of West Main Street, Forest City, died Wednesday, November 21, 2012.
He was the son of the late Michael Bernard Meade and Marie Lang Meade, was also preceded in death by a twin brother, James Meade, and another brother, William Meade and his sister Charlotte Meade. He graduated from Fordham University and was a real estate entrepreneur. He was a WWII Army veteran
He is survived by his beloved Diana.
A Graveside Service will be held at 2:00 pm, Tuesday, April 30, 2013 at the National Cemetery in Salisbury, NC. Rev. Becky Stanley will officiate.
To order memorial trees or send flowers to the family in memory of Daniel Bernard Meade, please visit our flower store.