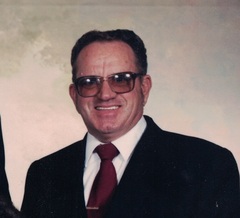 Mr.  Claude Ervin Brooks, 79, of Cleveland Road, Ellenboro, died Thursday, March 19, 2015 at Forest City Health and Rehabilitation.
He was the son of the late George Irvin Brooks and Rosie Lee Lovelace Brooks; and was also preceded in death by two brothers, Joseph Lee Brooks and Hugh Gene Brooks. He was a dedicated Christian, having served as Chairman of the Deacons at Plainview Baptist Church for 18 years.  He was a member of the Singingaires and was retired from Beam Construction.
He is survived by his wife, Wanda Brooks; two daughters, Patricia Rhymer of Ellenboro, and Carol Applegate of Wichita Falls, TX; five sons, Ronald Brooks and George Brooks, both of Ellenboro, Claude Brooks, Jr. of Rutherfordton, Tim Brooks of Bostic, and Jim Brooks of Forest City; a sister, Virginia Owens of Florida; two brothers, Herbert Brooks of Illinois, and Thomas Brooks of Florida; there are 19 grandchildren and 19 great grandchildren.
The Funeral will be conducted at 3:00 pm Saturday, March 21, 2015 at Plainview Baptist Church. The Rev. Marshall Dill, Rev. Paul White, Jr., and Dr. Robert Toney will officiate. Burial will follow in the church cemetery. Pallbearers are Kevin Brooks, Elijah Brooks, Jordan Brooks, Christopher Brooks, Dusty Whelchel, and Josh Bumgarner.
The Visitation will be from 1:00 pm until 2:45 pm Saturday in the church prior to the service.

To order memorial trees or send flowers to the family in memory of Claude Ervin Brooks, please visit our flower store.
Send a Sympathy Card