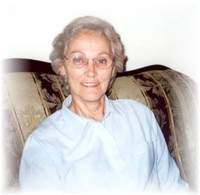 Betty J. Brooks, 80, of Prattville, AL, died Monday morning September 2, 2013 after a long illness.
Mrs. Brooks was born in Shelby, NC. She was the youngest child of the late Marvin Guthrie and Daisy B. Huskey Willis, and was also preceded in death by her husband Lewis G. Brooks, and their son, Lewis G. Brooks, Jr. She graduated from Casar High School and attended Howard College in Birmingham. Mrs. Brooks served in the Air Force during the Korean War and was retired from the US Post Office. She was the first female letter carrier in Dothan, AL. She was a member of the Golden Valley UMC and an associate member of the Wallsboro UMC. She enjoyed serving the Lord in many ways at every church she belonged to. She was a past member of the Eastern Star, DAR and the UDC. She served as a volunteer pink lady in multiple hospitals.
Mrs. Brooks is survived by her daughters, Babs and Andy Robinson of Williston, FL, Len and Joe Robertson, Prattville, AL, and Meg and George Walker, Erie, PA; four grandchildren, Ellie and Allen Fant, Morriston, FL, John Gray, Williston, FL, Byron Ray, Erie, PA and Jessica Ray, US Air Force; one step granddaughter, Ivy and John Campbell; five great grandchildren, Kyra and Jenna Mueller, Jaxson Ray, David Ray, and Colten Campbell.
The Funeral will be conducted at 1:45 pm Wednesday, September 11, 2013 at Golden Valley United Methodist Church. Rev. Linda Stack Morgan and Rev. Jesse Carswell will officiate. Burial will follow in the church cemetery. The Rutherford County Honor Guard will provide Military Rites.
The Visitation will be from 1:00 pm until 1:30pm Wednesday at the church before the service.
Washburn & Dorsey Funeral and Cremation Service is in charge of arrangements.
Online condolences @www.washburndorsey.com.
To order memorial trees or send flowers to the family in memory of Betty Brooks, please visit our flower store.