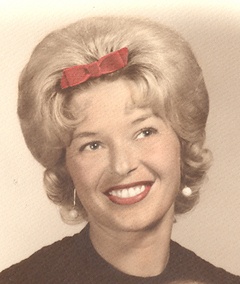 Mrs. Barbara Sisk Toney, 82, of Forest City, Friday, gained her Heavenly reward on July 1, 2016. She was the daughter of Carl and Emma Beheler Sisk. Born on the family farm during the Great Depression, Barbara learned the values of hard work and thriftiness. There, she also developed a strong faith in God that sustained her throughout her entire life.
Barbara raised her twin daughters following the untimely death of her husband, Clyde Marvin Toney, in 1964.  Despite having only a ninth grade education herself, she placed great value in education. Barbara was proud that both of her children not only graduated from college, but also earned advanced degrees. Her grandchildren brought immense pride and joy to her life as well. Barbara was known for her exceptional green thumb, which produced bountiful vegetables and beautiful flowers. She was rarely seen without her signature high-heeled shoes, and million-dollar smile.
In addition to her husband, Barbara was also preceded in death by her parents; brothers, Lee Roy Sisk, Charles Sisk, and Carlee Sisk; and stepmother Hazel Sisk. She was a longtime employee of Lowe's of Forest City and a faithful member of Mt. Pleasant Baptist Church.
Left to cherish her memory are daughters Lori Toney and her wife Kelly, of Forest City, and Lisa Bralley and her husband Barry, of Forest City; a brother, Johnny Sisk of Rutherfordton; 3 sisters, Colleen Melton of Bostic, Patsy Wright of Rutherfordton, and Ina Faye Bailey of Ellenboro; three grandchildren, Kaitlin Harris and her fiancÃ© Matt McDaniel, Ryan Harris, Ryan Bralley and his wife Lindsay; two great-grandchildren, Mason and Case Bralley. She is also survived by Rodney Dotson of Cliffside, whom she loved as a son; and her beloved canine companions, Maxx and Cooper.
A celebration of Barbaraâ€™s life will be conducted at 1:00 pm Tuesday, July 5, 2016 at Mt. Pleasant Baptist Church. The family will receive friends in the church sanctuary following the service. The Rev. Bob Philbeck will officiate. Burial will be private at Rutherford County Memorial Cemetery.
Memorials may be made to: the Rutherford County Backpack Program, 382 West Main Street, Forest City, NC 28043, or Hospice of Rutherford County, PO Box 336, Forest City, NC 28043.
Washburn & Dorsey Funeral and Cremation Service is in charge of arrangements.
Online condolences @www.washburndorsey.com.

To order memorial trees or send flowers to the family in memory of Barbara Toney, 82, please visit our flower store.